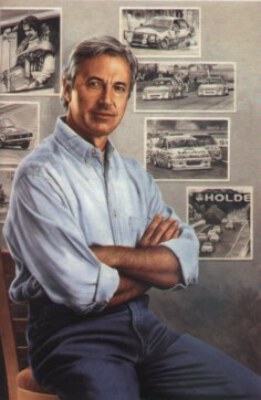 Hand Signed by Peter Brock
Philip Farley has once again shown why he is considered one of Australia's leading artists, with this magnificent protrait of Australian sporting legend: Peter Brock.

Peter Brock is an Australian Motor Sport phenomenon. Widely regarded as one of the most gifted drivers of his generation, Peter has captured the admiration of the public in the way that has seen him become the most popular personality in sport. He resisted the magnetic pull of Europe during his early racing life to carve out a spectacularly sucessful career in the one country he wished to call home.

This image has been re-produiced as a limited edition of of only 950 copies world wide. Each print comes with a presentation pack which contains the certificate of Authenticity along with the story behind each of the background images.